The Devil & The Lily | Allison Norfolk

A retelling of the fairy tale “Bearskin”, set in 1919 France.

Max Merkel is a soldier who came home in 1919 to find his former life buried. He becomes a pickpocket, until he steals from the wrong person–a hedgewitch who makes him a very strange offer. If he can accept her conditions and live as an ugly, homeless drifter for seven years, aiding anyone who asks, at the end of that time he will have as much money as he needs. Max agrees, though he wonders if true redemption is even possible for him.Martine Hoffman was born with the rare ability to see ghosts, in a family where all the female members are hedgewitches. Her closest companions, four soldiers killed in the trenches during the Great War, are invisible to everyone but her. She strives to draw as little attention to herself as possible so that no one will catch her talking to the air. When her father brings home a hideous stranger who saved his life, Martine discovers, much to her surprise, that Max might be a kindred spirit.But their time together is limited by the terms of Max’s agreement. Can what they have withstand the test of separation? 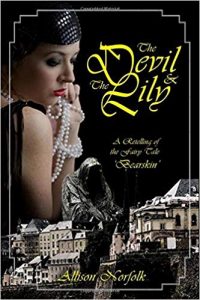